Let’s start with me. I am Paul John Joseph. I started my life in a mostly cold and snowy city in Western New York. I don’t remember life as a bowling ball, but I bet my Mom still does. I was told I was named after the Saints. I’m sure there were some lofty expectations. Paul John George would have been way cooler, would still be saints and I could have added Ringo later on.

I grew out of my roundness, with the exception of my head, and enjoyed my youth in the city that smells like Cheerios. Actually, my neighborhood smelled like raisins. Football, street hockey, baseball, bike riding all day and everywhere (A Chrysler interrupted some of that), model airplanes, hopping trains, church and school took up most of my childhood. Despite the bad influences of the church, I became a quiet, shy, and studious young man. I was destined for a life of spiritual wonder.

Well, things changed.
College happened, work happened, and Deb happened. There was a lot of stuff in between all that, and some of my friends would love to fill in the blanks. The only thing stopping the jerks is the material I have on them. Kind of like the cold war.

The Life of Debra.

Deb started her journey sixty miles to the east of me in a photographic little town. Now this is how baby’s are supposed to look, not like that other kid.

Deb became a quiet and studious young lady. She spent most of her time getting her brothers in trouble, and some other stuff that she doesn’t want in print, because “It’s nobody’s business, and why are you putting this in the blog anyway?!”

For Deb as well, college happened, work happened, and then I happened.

We were a happening couple, so we made a pact to continue happening for the rest of our lives.

Wasn’t long before we decided that school, a job, and having fun wasn’t enough to keep us occupied, so Kelly and Nicole happened.

Now we were a happening family. A super dorky cool fun family and just so you know we are pretty cheap dates these days. Our partying days are pretty much over unless you consider three beers to be over consumption.

Wow, were we busy. Not sure how we ever found the energy to raise a family, go to school, engineer stuff, play sports, take the kids everywhere, party with friends, etc. Somehow everyone remained relatively sane through the whole process. Though one of us may have went a little off the deep end.

One day at the office I was day dreaming about stuff. There was very little to do. I wandered off in thought, holding a pencil to paper making it look like I was doing something. There was no internet back then and yes, a pencil to paper. We wrote in cursive too. I was thinking that there has to be something more to life than engineering, minivans, soccer, hockey, yard work and weekend BBQ. So without hesitation I took sailing lessons. That’s right. Right out of nowhere. I was going to become a seafaring dude with a beard and one of those woolly navy sweaters…and a pipe.

I don’t smoke, but a pipe would be cool. Makes you look smart, like the kids father on the visible V8 model engine box. I never got one of those…Dad! 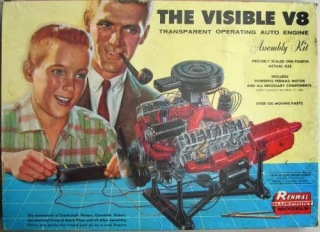 Deb was kind of shocked. It wasn’t the first time I had a crazy idea that sounded ridiculous at first, but ending up being relatively harmless. There was ice hockey in a beer league. Huge fun that was, until stuff started breaking. Not my sticks, my legs. Then there was the hang gliding interest. I only crashed the glider once, and it was in water thank God. If something is going to break on a glider, you want it to happen at thirty feet or less, not two thousand. I finally realized I loved life too much to hang glide, and at forty I gave up on chasing people on ice and beating them with sticks. I’m sure Deb was thinking this sailing interest would also turn into just another temporary distraction, or something she wouldn’t have to get involved with.

My desire to sail was always my little secret. Since I was a kid I was always dreaming of sailing a boat. Hey, there are worse desires a guy could have, like buying a motorcycle and running away with a cute little waitress at a diner in some old mid western town on your way to Cali. That’s a Bob Seger song, not a secret desire. I once crashed a scooter into a bus, so imagine a Harley and me. Anyway, I had wanted to get into the sport of sailing, but being a professional procrastinator, I put it off for many years. When Debra’s Dad passed away, I related to her that he regretted spending so much time at work and not enough time at play. That got me moving. I eventually took lessons at the Schooner’s Club on the Genesee River in Rochester, where I learned to sail on Sonars. Sonars are very fast 23 foot fractional rigged keelboats that are a dream to handle, and if I ever stop cruising I’m getting one to day sail with. They are awesome. 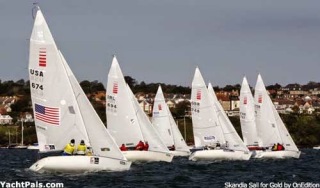 I had a retired city cop for my first instructor, and we took the Sonar out on Lake Ontario one summer night. The moment the cranky cop and I finally raised the sails that evening, a nice breeze had filled in and we reached for the sunset, I knew right then and there, that I was never giving this up. We rushed through the Sun sparkled water as the boat heeled, and the only sound was the increasing wind, the water rushing past, Seagulls gliding against a blue sky, the toe rail awash and the instructor saying… Ease it!

Ease it! Ease the main! Your left hand!

Let go of the line in your left hand!

“Deb, you need to do this!” I said with a gleam in my eye. “No. Don’t think so” she replied. I pleaded, poked, prodded and annoyed. All the things I do best, but to no avail. So I did the only thing a married man in his late 30’s would do in this situation. I bought a boat! Stunned, they all just stared at me and then the kids looked at their mother and back at me several times after I made my announcement. I piled everyone into the Van that evening to drive out to the river and see what Daddy did. Deb was thinking Sunfish, which was funny. I swore I told her it was twenty five feet long. When we pulled up under it with the van while it sat on a cradle she looked so surprised. Speechless actually. Then, I think the kids heard their first swear word ever to come out of their mothers mouth.

Soon afterward, Deb was in the same sailing school. Apparently she was thinking her idiot husband might not know what he’s doing out on the water, and her baby’s are not going out on the big lake without backup. She did great. She also loved it! Imagine that. A sailing family was born.

Our first boat had the name Impulse. Funny. She was a twenty five foot sloop from Hunter Marine. She was affordable, had a deep fin keel and a fast hull. There was room for a close knit family that didn’t mind overlapped sleeping and sweating.

We spent our summer days sailing upwind towards Canada as far as we could get before we had to turn her around to make it back before dark. The wind would usually die, and we would have to listen to the Johnson the fifteen miles back. Some days we just dropped sails, and took a nap. We looked like seals lounging on an abandoned boat. A few times we made it across the border before turning around singing “Oh Canada” as we pointed towards the south shore. We sailed, we motored, we raced, we had fun. Most weekends we lived aboard, enjoying the outdoors. It think this is where the idea of living aboard full time entered our brains.

Two more boats, lot’s more racing, kayaking, Sunfish racing, a few dinghy’s, lake cruising and lot’s of fun has helped us get to this point. We lived aboard every summer, eventually sold the house, ejected our stuff, did the apartment thing, moved onto the sailing vessel Kelly Nicole full time, and sailed her south to Florida. Here we are, living aboard a Morgan 44 and getting ready to shove off for some adventure, though I have to say it’s been a real adventure getting to this point.

Once the sailing adventures started, and the cruising logs were filled out, it only seemed natural for an engineer to migrate to the new technology at the time. So I started a blog. Why the name Latitude 43? Actually we were at north latitude 43 when we were in Rochester, and I always had that stuck in my head when I started hitting the books on sailing. I started reading up about sailing and navigation, before I actually got on the water. I tend to research things too much. That never worked for basketball, but I did know ALL the rules, which made me quite unpopular.

I had trouble creating a name for the blog. I am not that clever or creative so I chose our Latitude. Lame I know, but I’m stuck with it now. We are no longer at Latitude 43, but I hate to go through the process of changing the name, so we’ll keep it. Also, it really pisses off a certain restaurant in New Zealand* who wanted the domain name and offered nothing for it which makes me like it even more. Besides, if I changed it, it would only confuse my seven followers and Kiwis would no longer visit my site.

We plan on more adventures soon. Stick around. I try to keep it amusing, so if there aren’t any posts for a while, it just means we’re bored to tears, or dead. When you die do they delete your blog eventually? Will the blog exist forever so that my great grandkids can read it? Deb wants you to know that any weird stuff that gets posted is by me, Paul John George Ringo Joseph. Apparently Deb is going to post soon, but I wouldn’t pop the corn just yet.

You can also catch us on Facebook under S/V Kelly Nicole. Why? I don’t know. More ways to annoy people I guess.

Welcome to our blog. Don’t take it too seriously. We don’t.

* I think the restaurant folded. Apparently nobody could find it on the web. There is a latitude 43 restaurant in Gloucester MA which people come to this site for. Looks pretty cool. Buy my domain guys!!